“What do you suggest we do?” Mom’s voice rang out from the house. Even though I was in the yard, her voice easily carried past the screen door to where I was laying in the grass.

“I thought year-round school would be better for her, but maybe we were wrong,” Dad said.

Yes, you were very wrong. I was stuck in class while all the other kids were off enjoying their summer. Lame.

“The teacher said Lisa’s having a hard time fitting in. The other kids haven’t been the nicest.”

“She’s changing; I can see it. Sixth grade is hard enough without having to deal with this…”

“We had no idea what to expect,” Mom’s voice was a whisper. “This is unprecedented in your world. A half human child…”

I looked up at the dusk sky as the evening’s first few stars began to appear. The sun had almost set and the cicadas buzzed in the trees.

What was wrong with me? I suppressed the moisture that formed in my eyes and returned my attention to their conversation.

“Rowland, I don’t know what to do.” Mom was crying now.

“It’s okay,  Eliza, we’ll sit down with her and figure this out.”

I shot up from my perch on the grass and marched through our back gate and into the wooded area behind our house.

I was so upset, I almost missed the little sparkling light fluttering around my head. It seemed to be flying with purpose, beckoning me deeper into the woods. Curious, I followed.

“Where are we going, little guy?”

Through shrubs and over moss-covered boulders I trudged, until finally, the fluttering light came to rest on the side of an enormous tree. The tree was so tall, I couldn’t see its top, and it was wide enough to fit three of me side-by-side. Other sparkling lights joined us until the air was full of their magical presence. A moment later, the tree began to glow from beneath its bark. As it did, my skin shimmered with a faint turquoise hue.

Enchanted, I refocused on the base of the tree where an open door had formed. On instinct, I stepped through.

The second I did, I knew beyond a doubt I had found the answer to my question. I was half fairy, and I had just entered my home world. 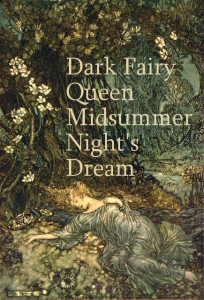 So here are the details:
It is summer, a faint breeze blows, and the leaves are rustling. As dusk falls, the fireflies glow in a distant meadow. Have you not felt the magic of a summer night? Your story should.
Let us celebrate a midsummer night by creating 400 words.

For your theme, your story must take place, at least in part, on a summer evening. Also, choose one from the following list:

In case you’ve read it, this story also ties in with an ongoing series I’m writing about Rowland and Eliza called The Transformation.